The Greatest Motorcycle Racers Of All Time

Racing fans love to discuss “who is the greatest driver of all time”. Not every driver will make it to the top and into the history books. Only a few lucky (talented) ones reach the top and are remembered for eternity.

In compiling this list of the best racers of all time, it was difficult to be able to number them in any particular order because, firstly, all of them enjoyed successful careers in different kinds of racing and secondly, they all were very good. So, numbering them in order would have made this list biased.

So, who is the best race driver? This question can start a fight. So we will not make one driver the #1, but instead list some of the names that would surely make the shortlist.

We’ve tried to include all the obvious choices, but there may be some missing that are the #1 for you. We apologize!

Giacomo Agostini
Ago was dominant driving for MV Agusta for many years, then just to prove that it is the rider not the bike, he switched to the 2-stroke Yamaha and won again! Giacomo Agostini is considered perhaps the greatest Grand Prix rider of all time. 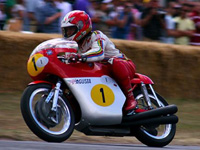 Seeing Ago on the MV Agusta battle Sheene on the Suzuki and Roberts on the Yamaha, is what dreams are made of.

A legend, and the only rider to win Grand Prix races in the 50cc and 500cc categories. Seeing Sheene on the Suzuki battle Ago on the MV Agusta and Roberts on the Yamaha, is what dreams are made of.

(1978). He is a 2-time AMA Grand National Champion and the 500cc championship 3 years in a row. Dirt track or road course – no matter to Kenny. That’s what a great driver is all about – “King Kenny”.Seeing Roberts on the Yamaha battle Sheene on the Suzuki and Ago on the MV Agusta, is what dreams are made of.

Mike Hailwood
Hailwood was known as “Mike The Bike” because of his natural riding ability on any bike. Later in his career he went on to compete in Formula One and other classes of car racing, becoming one of the few men to compete at Grand Prix level in both motorcycle and car racing. Mike Hailwood’s racing resume is impressive – nine-time World Champion, winner of 76 Grand Prix races, and 14-time winner of the legendary Isle of Man TT. He came out of retirement after an 11-year absence to win at the Isle of Man one more time.

In 1962, Hailwood signed with MV Agusta and became the first rider to win four consecutive 500cc World Championships. In 1964 he also won the United States Grand Prix at Daytona. After his success with MV Agusta, Hailwood went to Honda and won four more world titles in 1966 and ’67 in the 250cc and 350cc categories.

Hailwood was named to the International Motorsports Hall of Fame and Moto GP Legends Hall and was named as Rider of the Millennium by several European motorcycle magazines. To some, Mike Hailwood is the greatest rider of all time.

Phil Read
Phil Read, nicknamed “The Prince of Speed”, is an eight times motorcycling World Champion. He won the Isle of Man TT 8 times. Read was the first man to win world championships in the 125cc, 250cc and 500cc classes and is undoubtedly one of the biggest names in racing history.

Freddie Spencer
“Fast Freddie” will go down in history as one of the greatest road racers that America ever produced. In addition to winning three world championships, he was the only rider ever to win the 250cc and 500cc Grand Prix World Championships in the same season (1985). He was the only rider to win three major races during the Daytona Bike Week (the Superbike, Formula One and International Lightweight races in 1985), the youngest rider to win the 500cc Grand Prix World Championship (at 21) and the youngest rider ever to win an AMA Superbike race in 1979 (age 18). Spencer shocked the world when he won two legs of the Match Races, beating world champions Barry Sheene and Kenny Roberts in the process. Spencer went on to finish third in the 1980 Superbike championships and second to Eddie Lawson in 1981. In 1982 Spencer scored his first world championship victory by winning the Belgium 500cc Grand Prix. Spencer was just 20 years old.

Eddie Lawson
Eddie Lawson is a four-time Grand Prix motorcycle racing World Champion. His penchant for not crashing and consistently finishing in the points earned him the nickname “Steady Eddie”.

Lawson won the 1984, 1986 and 1988 500cc World Championship on a Yamaha and the 1989 World Champion on a Honda, becoming the first rider to win back-to-back championships on machines from different manufacturers. Lawson also won the ABC Superbikers event at Carlsbad Calif. in 1983 and 1985 which pitted the best riders from several disciplines against each other on a combined dirt and paved course, and in 1986,

Jarno Saarinen
A natural talent and passionate driver. He was considered one of the most promising and talented motorcycle racers of his era.

Casey Stoner
To some, Stoner is the best rider of all time.

Marc Marquez
Marc Marquez may be the future of GP Racing. First year as a rookie and wins the championship. Fastest lap times on every circuit. Winning back to back Moto GP Championships at his age has never been done before.

Jorge Lorenzo
The best ever Spanish rider. At one time he defeated all top riders in Moto GP.

Kevin Schwantz
One Moto GP championship but many wins.

Trett described the sensation of riding a Top Fuel motorcycle dragster – perhaps the most treacherous contraption in all of motorsports. “Making a pass on a top fueler is like being shot out of a rifle,” Trett said. “If your aim isn’t perfect, you’re going to miss the target.”

During his racing career, Jim amassed a total of 104 Top Fuel Harley records and earned nineteen #1 plates in the Top Fuel Harley class of racing while competing within various racing sanctions like the NMRA, IDBA, AHDRA, HDRA and DRAGBIKE. From 1988 to 1999, Jim competed in 254 races, amassed 100 wins and was runner up 45 times.

Jim McClure is a 19-time drag racing champion and icon of the sport.

Korry Hogan
Korry is an accomplished TopFuel drag bike racers and the world’s fastest.
In 2008 he earned that title when he became the first motorcyclist ever to exceed 250 mph in the quarter-mile at 250.97 mph, and in 2011 he set the Top Fuel World Record at 254.62 mph.